The SNO!down took place Saturday 15th May. Kicking off at 5pm with a 2 ½ hour Jam session things got going fast!! SNO!zone Castleford provided us with another epic park set up, with a technical rail line consisting of a 10m rail, side on mega pipe, canon mega pipe, a gnarly down rail or the option of a gap to flat down rail. The amateur line was slightly easier but still lovingly sculpted, included the 3m rail, small kicker option to flat down flat picnic benches. There was also a precision built gap kicker in the top section where we saw some huge cork and rodeo spins throughout the night. The music played its part in the night with a play list that felt like the best shred movie pick n’ mix getting everyone pumped. All of the places had sold out by 6pm Friday, with the entry cost only at £25 and an amazing set up who wouldn’t want to enter. Top UK skier James Woods and boarder Andy Nudds also came to shred. They weren’t just there to show off the UK’s talent but also do some coaching during the jam session to help the younger and less experienced riders. There were also some big names amongst the judges. Dom Harington, Wayne Taylor, Joe Tomlinson, Charlie Smith and Rob Hackney were judging for the day. They kicked off the jam session by riding for the first half an hour showing how the course should be ridden.

As the jam session heated up competitors started destroying the course, Sam Turnbull and Carl Howden were making the most of the kicker with their underflips and backside rodeo’s. Tom Hunt impressed the spectators with his front flips off the canon pipe and cab 270’s on the gap to flat down rail.

Jamie Lawson and Oliie Powell were on top form. Jamie was killing it all night, showing off his range of technical tricks on the 10m and down rail. Together with his laid back steeze he managed to bag 2nd place in the 17 and over category.
Ollie Powel was riding consistently all night. He was throwing sick 540’s over the kicker, showing his range of pretzels on the top section and 6’s off the canon mega pipe. As well as 1st place in the age 13-16 category, Ollie walked away with the Golden ticket. This was an exclusive invite to one of SNO!zone’s street sessions chosen by Damian Doyle.

A big shout out has to go to all of the under 12’s. These guys were showing up some of the older riders. Rowan Coultas was on top form as usual, mixing up combinations of kicker and rail tricks with style. He won top spot in the under 12’s snowboard category. John Leetham came second in the under 12’s and this was his first competition! Back 3’s, tailslides on the 10m, consistent and stylish, these boys have got big futures ahead of them.
Haydyn Fiori, only 9 years old, was also on top form and showed he is not afraid when he attempted a huge disaster on the flat down rail. But it was Ronan Connolly who took the ski title in the under 12’s. He was consistently throwing down and this kid oozes style. Expect these kids battling out many a freestyle competition in the future.

The ladies were on fire and definitely gave the boys a run for there money. Katie Ormerod made 1st place her own in female snowboarders and Sissy Herent took 1st place in the female skier’s category. Faye Young also impressed the judges with her front flips and claimed 3rd in the female snowboarders and the electric sick chick award, chosen by the coaches for outstanding female rider of the night. 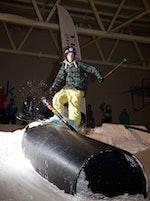 At 7.30pm it was time for a well earned break and a swift park re-shape. Then came the SNO!down Throwdown. The riders had one run each to show off their skills. This was a good opportunity for first time competitors to feel what its like to take part in a limited run competition but without the pressure.
The skiers were up first, they all gathered at the top so they could cheer as each competitor dropped. The atmosphere was great and slave monkey was up to his usual tricks on the mike. Josh birch and Sam Turnbull were crowned the SNO!down Throwdown winners and each collected a goodie bag. Sam’s run stood out from the rest with a huge back 270 disaster on the flat down and Josh’s smooth and technical run included a 450 out of the canon pipe, 270 on the down rail and 270 on, 360 switch up, 270 out on the box.
Prize giving in the bar saw over 35 prize bags given away. The event sponsors hadn’t held back on generous donations!
Carl Howden was awarded Rider of the night!! The judges were very impressed with his back 7’s and his transfer from kicker to mega pipe back flip hand plant.
The best un-sponsored skier was Dean Eccleston and the best un-sponsored snowboarder was Dean Horsefield, it was a good night for the Deans!!!

Get well soon Tom Black who broke his arm on his one run final!!!

Charlie Smith quotes “Definitely one of the best comps I’ve seen this year, it’s great to see everyone being able to ride around with their friends in a chilled out competition environment without any pressure.
It was an awesome turnout in numbers and the atmosphere was immense.
I would most certainly like to see a sequel.”

Longtime sponsor of the late Arne Backstrom, POC have decided to hold a memorial for the freeskier in PlumpJack Squaw Valley Inn in Olympic Valley,...

This season, the 3TP family brings you a friendly movie featuring some Montrealers. They traveled around the Quebec province to bring you their adventures. Featuring: Andrew...

Horsefeathers Superpark at the Dachstein glacier is ready and waiting for you to head over for a long weekend of jibbing in the park or...

Longtime sponsor of the late Arne Backstrom, POC have decided to hold a memorial for the freeskier in PlumpJack Squaw Valley Inn in Olympic Valley,...

This season, the 3TP family brings you a friendly movie featuring some Montrealers. They traveled around the Quebec province to bring you their adventures. Featuring: Andrew...

Horsefeathers Superpark at the Dachstein glacier is ready and waiting for you to head over for a long weekend of jibbing in the park or...

For the fourth time in a row, the Skullcandy Railbattle will be held at Snow World Zoetermeer in Netherlands for every ski and snowboard nut...

Moment Team Riders KC Deane and Scotty Nikkel’s fifth episode of the new monthly video series entitled ”In the MOMENT” featuring some of the...

Please enter your email so we can keep you updated with news, features and the latest offers. If you are not interested you can unsubscribe at any time. We will never sell your data and you'll only get messages from us and our partners whose products and services we think you'll enjoy.