After the release of his much hyped edit Vanilla, featuring sunny spring laps of Whistler’s parks with Max Hill, Corey Vanular and Leigh Powis last week, I thought it was a good time to drop talented British filmer and rider Rory Langdon-Down a line.  Here he dishes out some advice on breaking into filming, his set up and what he got up to this winter. 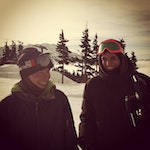 Hi Rory, how you doing? Tell us a little bit about yourself, how did you get into snowsports and filming?
My first trip skiing was when I was 5, to a small resort in Austria, called Spital Am Zemmering, and I took to it right away. By the age of 7 in 1997, I was seeing a lot more snowboarding and the appeal of doing jumps and the ‘cooler’ sport took over. 11 years later and I headed on my first winter in Canada before going to university. I worked as a ski instructor but spent my days off snowboarding and filming a season edit with my friend Martin Ball (who has gone on to make some incredible films). We shot ‘Fresh’ on a Fujifilm digital camera with a video function. It was so basic, but so much fun that it kick started what I do now. I went to Leeds University and spent 3 years filming all the skiers and riders there for the annual edits for the Snowriders and worked incredibly hard to produce content that would be better than the previous edit I’d done. Now, I have just returned from my second winter in Whistler where I worked for an on-mountian film and photography company, whilst freelancing and interning for Sherpas Cinema.

Yeah so you spent the past season in Whistler, I watched your Whistler Park Sessions and felt hugely jealous of the parks you guys had out there! How did the season turn out? Who was the crew you were filming with?
Last season was crazy. I had sorted a visa out over the summer but then decided not to go to Canada and get a job in the UK. When I didn’t get the job I wanted at home and was offered a film and photography job full time in Whistler (3 weeks before I left), I took the opportunity. I had about 6 of my closest friends out there from Uni, but I only told one of them I was coming so it was a bit of a shock for the others when I turned up and that night set the tone for the season.

Fortunately I have some very talented friends, Jonny Corsane is a best mate who rides for Bro!Clothing and has won some national comps back home, and then through where he worked I met Tomi ‘Salmi Cart’. He’s a 27 year old finish guy who learns every trick in all 4 directions before claiming it. He always lands on his feet and his style is incredible. We then developed a good crew including an Aussie shredder, Blake Anderson, and some more of the English guys and girls. And it wasn’t all snowboarding, Dave Devine kills it on skis but was out for a while with a broken leg after injuring himself in a foam pit.

Your edit, Vanilla, with Max Hill, Leigh Powis and Corey Vanular got picked up by the likes of Newschoolers and Freeskier, you must be pretty stoked. How did filming with those guys come about?
Yeah, it was really surreal having an edit get picked up and promoted like that. I’ve never had that kind of exposure. Filming with those guys came about through chance really. I work pretty hard to make connections and I’m a genuinely huge fan of both skiing and snowboarding. One day I was on the hill working and I saw Leigh Powis who I recognised from magazines and his Poor Boyz segment. I really like his style and attitude to the sport. I got home and found him on Facebook and sent him a message saying something like “Hey man, I guess you have your own filmers, but if you ever want me to film and put together an edit for you, let me know… here’s my portfolio”. He got back to me saying that’d be useful and over April and May we filmed whenever we were both around and his knee could hold up. Through him I met Max and Corey as well as some others and filmed a few shots of them too. It was very relaxed.

How much harder is it to break into to the industry coming from a British background as opposed to the say the US, where you have some of the world’s most incredible terrain on your doorstep?
A few years ago I would have agreed that it was a disadvantage to come from the UK to get into professional action sports as an athlete or filmer, but in 2012 I made a radio documentary on British freestyle skiing and James Woods made a really good point. After asking a similar question to him he told me that what people don’t see is that the indoor domes mean our kids have some of the best rail games in the world and the ability to ski on snow or plastic all year round.

Without a doubt it’s something you have to work for, but it gives you an opportunity to really show off. In terms of independent ski film makers the UK actually has a lot to offer. Iona Fulton who I was at Uni with got an invite last year to film at Nine Queens and she killed it with a podium finish for her edit.

Your edits have quite a distinct feel, there is always a lot of talk about riders needing a unique style but how much does your individuality as a filmer come into your thinking when you’re framing shots and editing for example, in an age where everyone seems to have a go pro attached to their head?
Yes. A unique style is so important. As you said, everyone is putting out edits now all the time and it pays to be noticed for the filming/editing talent as well as the action on film. Abe Kislevitz who is now the chief producer of the Official GoPro edits you see all the time was spotted after making his GoPro edits for the University of Southern California ski team stand out hugely. The reason I love filming is because if I get a great shot of someone throwing a Cab 9 or rodeo 5, I get the same feeling they get as they ride away. The pay off is the same. I always get annoyed if they land their trick and my shot isn’t perfect, because it’s my job to ‘land’ my shot every time. It’s always good to be creative, and that doesn’t mean original. I use shots I’ve seen others do and I adjust them slightly or edit them in a different way, but when I come to editing I want every shot to be in there for a reason and it if people challenge me on shot selection I can at least justify it to myself, and the rest is objective.

Any advice for budding filmers and photographers here in the UK?

Produce a lot of content. To date, 95% of the content I have produced has been for free, but it has taught me more than any tutor could have. Always better your last piece of work and be critical of your own work. For ages I would put out edits that got nothing but compliments, which is lovely, but obviously it’s not a perfect edit so listen to comments from others. I have a great friend called Nick who is fantastic at criticising my edits in a really positive manner and I genuinely learn a lot from what he says. He’s a true Northerner and won’t mince his words!

What set up do you use? Any particular favourite pieces of kit or software?
I use a Canon 7D with a various lenses (70-200mm is incredible for long shots and my 10-24mm super-wide is perfect for followcam stuff). Aside from cameras there are two things that are vital in a good ski edits. Firstly, a great tripod. One with a decent fluid-head so the shots are smooth and it limits any shaking. Secondly, either a steadycam or camera cradle for follow cam footage. I have a steady cam that makes the world of difference but anything to remove that mind-numbing shaky footage you see in almost every amateur edit. If they’re too expensive, youtube how to make one, they’re not impossible.

Any other projects in the pipeline, or edits set to drop we can keep an eye out for?
Not currently, though I met a great filmer called Callum Jelley, who’s British, when I was in Whistler. He is very talented and has worked with Voleurz and Sherpas Cinema and films a lot of mountain biking, so I’m hoping to collaberate with him this summer as I haven’t done any bike stuff before and he can teach me a lot. I’m next looking forward to the releas of ‘Into The Mind’ by Sherpas Cinema which is out on 28th September. I was lucky enough to work on this for 3 months as a production assistant and fingers crossed I may have a shot in that film which would be my greatest accolade yet!

Cheers mate, keep up the good work!
Thank you!

Britain’s Got Skiers is back for another year and it’s ready to showcase the depth of talent we have in our country. With the likes...

There are so many ski companies out there at the moment that choosing one for its values and not one for its product is a...

Britain’s Got Skiers is back for another year and it’s ready to showcase the depth of talent we have in our country. With the likes...

There are so many ski companies out there at the moment that choosing one for its values and not one for its product is a...

Abandoned at birth because of their vile nature, the meth babies had to live a hard existence on the streets and alleys of the grim...

Please enter your email so we can keep you updated with news, features and the latest offers. If you are not interested you can unsubscribe at any time. We will never sell your data and you'll only get messages from us and our partners whose products and services we think you'll enjoy.